National headquarters, Il Ginkgo, is in viale Stefini 7 in Milan. 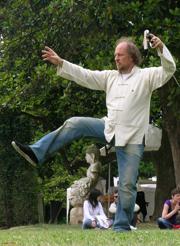 In 1985 he continued his studies with Great Master Chu King Hung, and in 1988 became his direct student.

In 1993 was appointed by Master Chu the Itcca leader for Italy and in 2004 the 6th generation Yang family disciple.