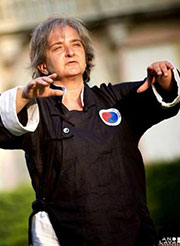 Begins her study of Tai Chi Chuan in 2008 with Chiara Lavezzari and M° Carlo Lopez, Italian branch leader of International Tai Chi Chuan Association.
Since 2014 she is Master Chu King Hung’s student, once a year she attend her private training lessons.
She is Tai Chi and Qi Gong instructor for ADO-UISP since 2011.

Since 2010 she has been involved in the study of both Bach Flowers (Unione di Floriterapia - UF), attending workshops and seminars with the leading Italian and foreign experts of floristry, and the study of the Tibetan Bells, where she obtained the Master level, with M° Thonla Sonam.