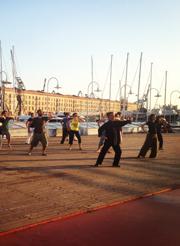 Weekly lessons in the city in the heart of the historical center at: 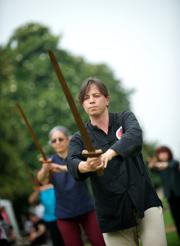 Born in Genova the  12th december 1978
Resident of Genova

Since 2008 she is Master Chu King Hung’s student, once a year she attend her private training lessons.

Graduated in Philosophy, she worked as trained nurse from 1998 to 2011 at urgent surgery ward.

With different skill and interest based on well-being techniques from physical to spiritual matters.

Her spiritual growth has founded its natural expression and satisfaction with the practice and study of Tai Chi Chuan.

I met the Tai Chi Chuan because, being tired of practicing sports whose goal was to seek outward perfection, I was relieved of the slow rediscovery of inner perfection.

I Practical Tai Chi since October 2006 when I started following the weekly lessons held in Genoa by the teacher Chiara Lavezzari and the monthly internships held by M ° Carlo Lopez.

Since 2010 I have been accredited as Tai Chi and Qi Gong teacher at ADO-UISP and since 2015 I am Master Chu King Hung’s student, European leader of ITCCA and authorized teacher of the Yang Original style.