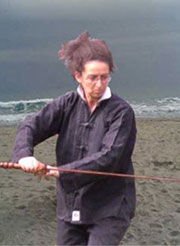 I met Tai Chi Chuan during a trip to China in 1997: fascinated by this art I studied with a Chinese Master during the whole month of August, for about 5 hours a day.

Since 2005 I have started my course of study with Master Chu King Hung and I'm one of his direct students.

Together with my husband, Aldo Munizza, I established an association called "At the center of the Ch'i" for the study and dissemination of the Tai Chi Chuan of the Itcca School.

I have been teaching Tai Chi Chuan since 2002.