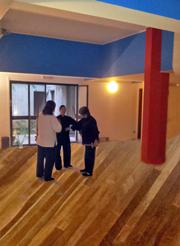 In 1985 he continued his studies with Master Chu King Hung, one of the three disciples of the Great Master, and European leader of International Tai Chi Chuan Association.

In 1988 he became one of Master Chu's direct students and dedicated himself full time to the teaching of this art.

In 1993 he was appointed by Master Chu the Itcca leader for Italy.

Its main mission is to train qualified teachers to spread the "Original Yang Style", a name given by Yang Chen Fu’s eldest son to preserve the authentic Yang style.

In 2000 he became the national leader of Yang technical area, for Tai Chi Chuan, of ADO-UISP and in 2005 Yang area leader.

As Itcca Italia's president, he is also the advisor for IAS, Interassociazione Arti per la Salute (Inter Association of Arts for Health), adviser.

One of his writings, "The Sacred Body", was published in June 2003 in a special edition, dedicated to the “Sacred”, of the Psychoanalysis magazine "Gli Argonauti" (“Argonauts”) www.davidelopez.it.

Since 2004, when he became a disciple of Master Chu King Hung, he is also the 6a generation Yang family disciple.

In 2005 when Ado-Uisp Qi Gong area was founded, he was appointed Master and member of the Technical Committee for that area.

In 2012 the new Itcca Italia head office is moved to Il Ginkgo.

Carlo Lopez has an experience of over 30 years of constant practice and 30 years of continuous teaching in the fields of Tai Chi, Qi Gong and meditation; he is a renowned teacher of great experience. He is faithful to the Yang style of the school founded by Yang Sau Chung for its great depth in the awareness of movement, its energy, and its philosophy.

Born in Milan on the 20th of April 1994, I begin the practice of Tai Chi with my parents, Master Carlo Lopez (disciple of 6th generation of the Yang Family) and Master Patrizia Roberti. I begin a more elaborated study of it in 2014, when I start to attend regularly the lessons. In 2017 I begin to assist my father in the first year courses, while, in the 2018 autumn, I attain the Tai Chi and Qi Gong teacher certificate released by UISP-DO. In the following year, I become a direct student of Master Chu King Hung, and I obtain the title of ITCCA teacher.